Conspicuous in the most complex, radical and challenging Italian painting of the last thirty years is the esoteric and mysterious work of Lino Frongia.  His virtuosity has elicited widespread admiration stunning sensual studies honoring Old Masters, together with the neoclassical pair conceived for Gianni Versace (see Sotheby's), recommend him as the greatest “old master” painter alive.

Academy colleagues recall a magician.  Frongia continues to seek absolution for his original sin and escape from confinement in the virtuoso trap.  Often misunderstood, he attempts to distinguish himself from a pride of false-realists, realists, hyper-realists and neo-figurative types.  Frongia embodies classicism instinctively; Apollonian tendencies incessantly spar with a Dionysian drive.  His is an unattainable paradise.  Independent of Raphael, Titian or Velasquez, Frongia explores a topography that takes him farther afield, perhaps even to a survey of the reality of post-Freudian consciousness.  Relative to any of his contemporaries, however talented, dedicated and enamored of painting, Frongia exhibits an urgency that covers even the most miserable of his subjects with fine raiment.

Without artifice, ideology, or theorem to prove, Frongia’s prodigious painting skills propel his vision, whether in more traditional compositions or in works where his obsessions are freed.  He avoids indulgence in Surrealism, painting dreams and visions in allegorical guise as if referring to an unwritten text, an apocalypse not of Patmos, but of his native .

Intricate, obscure iconography in imposing works returns nobility to painting and solicits the sublime – in spite of Frongia’s deliberate minimization of technique, renouncing an imperious touch.  Beguiling with elaborately cogent imagery, Frongia camouflages his intimate fantasies.  Unlike that of the surrealists and neorealists who transcribe visions and develop absurd symbolism, Frongia’s realism is unconscious.  Formality is rejected as unnecessary.  Perfection is in the idea, and painting follows.  Focus is obstructed to the point that images become negatives; blurry-edged figures unfolding in a dim dusk emerge to test our visual prowess, not the efficacy and consequence of archetypal painting. 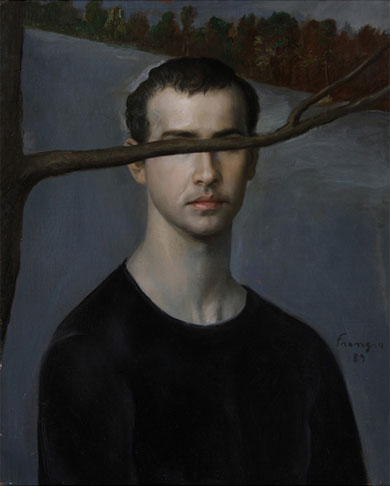